Perspective is the palette from which you paint your world. If you use drab colors, your existence will be dreary. Dobi and Yugy of the sibling artist and production duo, SYBS, were raised celebrating life with a joyous, faith-based mindset. Even when times have been bleak, the brother sister team have seen vibrant colors peaking through. It’s an infectious mindset that imbues the pair’s refreshingly eclectic aesthetic. 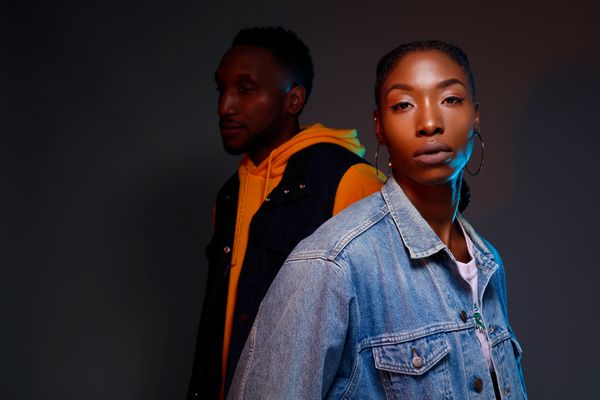 SYBS is a transatlantic, cross genre, and pan cultural musical experience. The siblings are of Nigerian descent and have resided globally. Currently, the pair split their time between London, New York, and Los Angeles. The pair’s exhilarating sound is a contemporary fusion of Urban Pop, R&B, and African influenced rhythms. It’s music that moves your head, hips, and heart. In March of 2019, their single "Flex On The Beat" landed at #25 on the UK Commercial Pop Charts.

SYBS is the culmination of two parallel lives in music. Dobi and Yugy share a grounding in classical music and panoramic listening tastes. The siblings grew up in a house where Beethoven, Mozart, West African High Life, The Beatles, Motown, Sam Cooke, Madonna, Sade, Abba, Stevie Wonder, Michael Jackson, and David Bowie coexisted as a vibrantly varied soundtrack. Their paths have been divergent—with Dobi blossoming into a charismatic front-person and songwriter, and Yugy finding his gifts in the subtle side of the arts as a producer, songwriter, and composer.

Though their partnership seems inevitable—both are accomplished producers, songwriters, and lifelong musicians—SYBS could only have happened now. Recently, Dobi closed a 5-year chapter with her touring band, and Yugy left his post-basketball career to dedicate his full time to music. “I don’t believe in coincidences,” shares Dobi.

SYBS is music of unity. Dobi says: “Besides the name touching upon us being brother and sister, the name represents that music brings us all together, and that makes us all siblings,” Dobi shares. Adding to poignancy here is that music also brought Dobi and Yugy together. “We were not that close as brother and sister when we were younger. It was, ultimately, a shared love of music that helped us find common ground and develop a stronger relationship over the years” Yugy says.

As artists SYBS will be spreading a message of passion and unity through their music. Yugy says: “We want to connect to people with love and build a community around our music and outlook on life. If in some small way we can inspire others to pursue what they are passionate about and make room for it in the midst of their busy lives we would have done something meaningful.”